Joachim Ladefoged b. 1970 Has worked as a professional photographer since 1991 and is a member of the international photo agency VII.
Today he works regularly for editorial clients such as The New York Times Magazine, TIME, MARE, and The New Yorker. Over the years Joachim Ladefoged has received numerous awards for his work from institutions such as Visa D’Or, World Press Photo, POYi, Eissie, and Agfa, as well as Picture of the Year in Denmark.
He has been named one of Photo District News’ 30 emerging photographers to watch and he has participated in the Joop Swart Master Class at World Press Photo. Next to his carrier as a photojournalist, he has worked for commercial clients such as NIKE, Siemens, Bang & Olufsen, Vestas wind power, TDC, Danske Bank, IBM, Pepsi, Johnnie Walker & Gatorade.
website:    www.joachimladefoged.com 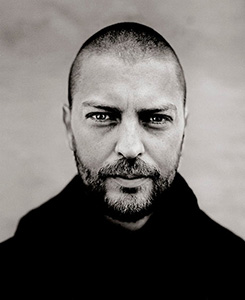 In 2000 he published his first book ‘Albanians’ that pictures the turbulent life of the Albanians between 1997 and 1999. In February 2008 he published his latest monograph “Mirror” and in 2009
he directed the short film “Mirror” about bodybuilders.
With VII he has contributed to three major book projects: ‘Tsunami’, ‘Forgotten War: Congo’
and ‘VII – questions without answers‘.
Joachim Ladefoged has exhibited his work in several solo and group exhibitions all over the world
and is represented in the collection of the Danish Royal Library. Joachim Ladefoged is credited with being one of the driving forces behind the new wave of Danish photojournalism.